American-born writer Fredric Raphael has spent most of his 83 years garnering admiration and awards for his work. A published author by the age of 23, he has written many novels as well as screenplays to films including Far From the Madding Crowd, Darling for which he won an Academy Award, and Two For the Road which starred Audrey Hepburn and Alan Bates. Throughout his career, Raphael has worked with a number of renowned film directors of whom Stanley Kubrick may well have been one of the most memorable. Together, they collaborated on the screen play to the controversial film, Eyes Wide Shut.

In recordings made exclusively for Web of Stories, Frederic Raphael speaks candidly about his formative experiences as a young American boy in war-time Britain and later about his career in show business. To enjoy these stories and more, click here: www.webofstories.com/play/frederic.raphael/1. Happy listening! 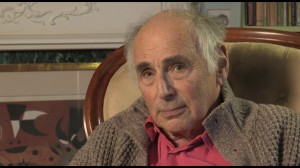