Today we launch our newest speaker on Web of Stories! Listen to science fiction writer, Brian Aldiss, tell his life story in a series of fascinating videos. 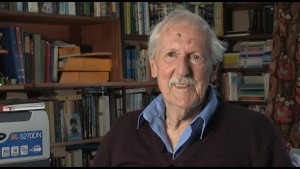 h writer and anthologies editor, best known for his science fiction novels and short stories. He was educated at Framlingham College, Suffolk, and West Buckland School, Devon, and served in the Royal Signals between 1943-1947. After leaving the army, Aldiss worked as a bookseller in Oxford, an experience which provided the setting for his first book, ‘The Brightfount Diaries’ (1955). His first science fiction novel, ‘Non-Stop’, was published in 1958 while he was working as literary editor of the ‘Oxford Mail’. His many prize-winning science fiction titles include ‘Hothouse’ (1962), which won the Hugo Award, ‘The Saliva Tree’ (1966), which was awarded the Nebula, and ‘Helliconia Spring’ (1982), which won both the British Science Fiction Association Award and the John W Campbell Memorial Award. Several of his books have been adapted for the cinema. His story, ‘Supertoys Last All Summer Long’, was adapted and released as the film ‘AI’ in 2001. His book ‘Jocasta’ (2005), is a reworking of Sophocles’ classic Theban plays, ‘Oedipus Rex’ and ‘Antigone’.

Listen to insightful stories recorded for Web of Stories by Brian Aldiss HERE.

Next post: Publisher and editor Peter Mayer talks to Web of Stories